Håkan Nesser - Through the Eyes of Eugen Kallmann 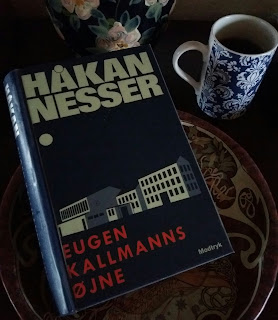 Håkan Nesser is one of the authors I really like to read, and I have just finished Through the Eyes of Eugen Kallmann.

It is a crime in true Nessarian style. Several murders takes place  - seen from different perspectives and over a period of 25 years. The main characters in the book are linked to the school in K, either as teachers, students or relatives to the aforementioned. Kallman was a teacher at the school  in K, but dead when the book begins. Whether it's natural death or murder is not known, but both a group of teachers and some students try to figure it out, as well as the police. The year is 1995 and at the same time  the city and the school is harassed by xenophobic skinheads with Nazi inclinations. It's not a  breathtaking action filled  crime, but slowly reveals the intrigues while the characters come alive.

Other books by Nesser I have read with great pleasure:
The Barbarotti series:
Man Without Dog - A Completely Different Story - A Story of Mr. Roos - The Lonely Ones
The Van Veeteren series:
Mind's Eye - Borkmann's point - The Return - Woman with Birthmark - The Inspector and Silence - Münsters Fall - Hour of the Wolf  - The Weeping Girl -The Strangler's Honeymoon- The G File

Out of series: The Story of Mr. Roos - The Fly and the Eternity - From Doctor Klimke 's Horizon - The Sky Over London - The Living and the Dead in Winsford - The Worms of Carmine Street - The Shadows and the Rain.

All absolute readable with fine person and environmental descriptions..

You can read about Håkan Nesser  at his  website: nesser.se

I found a couple of his books I haven't  read  yet - lovely!