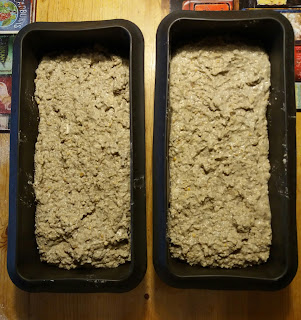 I have been baking our own rye bread for approximately 30 years. Our original sourdough came from  the Faroe Islands and we used it for several years, until  I forgot to save a portion for the next batch. Such a pity, bur it is not that hard to start a new one.
Starting a sourdough:


My original recipe for rye bread is on my homepage but in danish:

Over the years I have changed the recipe a bit. I do not use cut rye kernels much anymore, as  they often contains bits of crushed stone. Instead I use  :
2 dl sourdough
1½ l water
1 bag ecological five grain mixture (400 or 500 gram depending on the brand ) The one in use at the moment is from Änglamark and contains wheat kernels, rye kernels, sesame seeds, sunflower seeds and linseed, but you can easily make your own mixture of seeds.
I sometimes put in cut rye kernels as well. I keep them in a glass jar and shakes the glass in the hope that any possible bits of crushed stone may go to the bottom of the jar. I do so hate to bite in a "stone".
approx. 1,8 liter ecological rye flour (the texture of the dough should be a bit like thick porridge) This will make you 2 breads.

Remember to take apart 2 dl of the dough. Put it in a glass container and sprinkle the surface closely with coarse salt. Store it in your refrigerator. I do not put salt in the dough any more as I think the salt coming from the sourdough is quite enough.

I make the dough around noon. I  put it in two silicone rye bread forms and cover it with  a damp dishtowel and leave it till the next day (room temperature). Then I bake it 1½ hour at 175 degrees . My rye bread forms are from Lékué - they have lasted many years and the breads are easily slipped out of the forms. Leave it to cool in the oven to use the residue warmth.