December 05, 2017
I tried to make rice pudding in my slow cooker, and that was very easy.
Ingredients for the pudding: 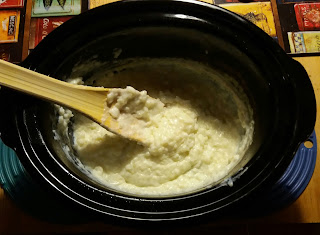 I greased the ceramic bowl with butter and then just poured in the milk and rice .Put the cooker on MEDIUM for 4 hours and then HIGH in almost 1 hour.  Seasoned with a little salt and ready to serve with  a knob of butter and cinnamon-sugar 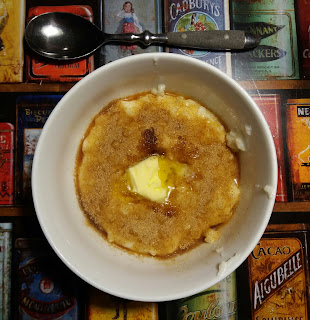 I tried this recipe after  having read  about bacillus cereus in a danish magazine called Samvirke. Imagine you can be more than 70 and not heard of it before. Especially because it according to the article is something you should be aware of. I used to cook a big portion of rice pudding the day before Christmas and then make rice a la mande, which would normally last for three days,and  always stored cold, but I don't dare do that any more, even though we have survived numerous years. We also survived eating rice salad 2-3 days in a row, but now I  will only make for a day at a time. That makes it great it is so easy to make in the cooker.