Turtles All the Way Down

December 14, 2017
I have previously read:
An Abundance of Katherines and The Fault in Our Stars by John Green, so I was looking forward to this: 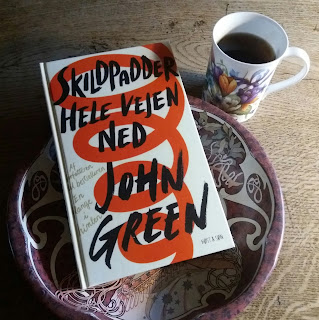 I definitely wasn't disappointed.
It's about 16-year-old Aza Holmes and her friends / boyfriend. Aza has lost her father and is suffering from OCD. She tries to be a good daughter / friend / girlfriend, but at the same time she is full of thoughts, she can't control. In a camp for children who have lost a parent, she meets Davis the son of a billionaire. Now a few years later, the father has disappeared and Aza, and in the beginning also her friend, tries to find him.
It is a book that describes  quirky existences, friendship and the first love. The persons are knowledgeable, philosophical and often fun. At the same time, it is also a great description of how it is  to live with obsessive thoughts and what it is like for close family and friends. A really good young adult / adult book.

The nice thing about writing a blog is that you learn a lot by doing it. Now I was for instance checking the author John Green, and found his homepage  including among other things his podcast: Dear Hank and John, and also a book I haven't read yet called: Looking for Alaska.