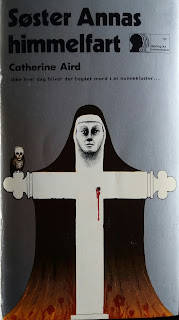 In Three Bedrooms, One Corpse the main character Aurora read a crime novel written by  Catherine Aird. I didn't know if this was a fictive author. I therefore looked up Aird on the internet and found it wasn't fiction . I then borrowed and read The Religious Body by Catherine Aird (in Danish: Søster Annas himmelfart).
It takes place in a nunnery  in which a nun is murdered and police inspector C. D. Sloan is being summoned. It is a crime novel published in 1966, but republished in 2015 (English). This is the first volume in the Inspector Sloan series. The story taking place in a nunnery is interesting and part of everyday life is described. Apart from that it is a crime novel in the Agatha Christie genre. Although not with quite as lively characters. Maybe the recurrent characters develop in the following  volumes. In total there are 26 novels in The Inspector Sloan series.

The book was also a revive of the way books were bound  for library use. When I  started as a school librarian (1985) almost all books were bound this way. The colors might vary in  red, blue or green. Not the most inspiring bookshelves to look at, but fortunately that has changed.