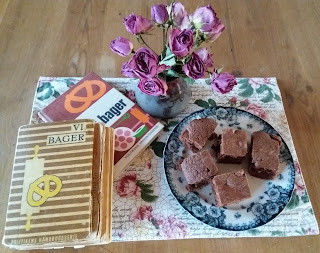 My recipe for brownies originates from my very used and worn cookbook: We bake from  Politiken Handbook series. It was published in 1960. In the same series has been published: What to drink, We Cook, Sweet and Sour. They are among the publishers' books for female readers, as featured on the cover page. Since it was so worn out, I have also bought the 4th edition from 1969 antiquarian. It is without the stripes, but still for female readers. A bit has happened since 1960/69. I do  think the target group will be slightly extended 😀

Thinking about this progress made my day, but it was sadly ruined by a notice on Facebook from Dansk Folkeparti. It was a vote about Somali women, whether they were an enrichment or a burden. Then I felt like living in the 30th - 40th. First I thought it was Fake News, but when I went to their website it showed unfortunately to be true. I fail to understand how anyone can believe that integration is improved by mobbing and annoying. It made me somewhat sad. 😢

Well, but it was brownies it was ment to be about - and here's the recipe: