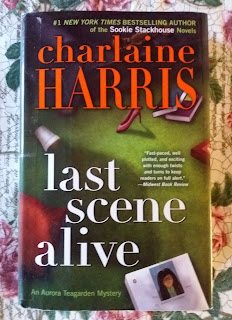 The author Robin Crusoe, who we were acquainted with in Real Murders, has written a novel about the murders that took place at that time. This book is now to be filmed and a team from Hollywood is to Auroras regret coming to  Lawrencetown. The actress, who is going to play the part of Roe in the movie, gets murdered, and soon Auroras life is in danger too.
I still like the series enough to want to keep reading it and has order the next one from the library.
The joy of recognition and also fun to follow the various characters, even though they lack some depths and development in personal characteristics

This  was no. 7 in the Aurora Teagarden series.

Other books in the series I have blogged about:
Real Murders 1
A Bone to Pick 2
Three Bedrooms, One Corpse 3
The Julius House 4
Dead Over Heels 5
A Fool and his Honey 6