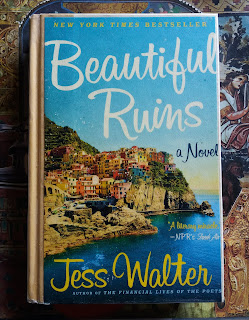 Beautiful Ruins by Jess Walter
The story begins in 1962 in a small, remote  Italian coastal city. Pasquale Tursi owns a hotel (Adequate View Hotel), and one day an ill actress arrives. Except  her and another American, who is trying to write a book, there aren't many guests.
From this place we are taken to Rome, where the filming of Cleopatra is ongoing, and into the world of Hollywood. A lot of people are woven into the story, and also part of manuscripts (book, film and a biography). It is a love story that extends over a lifetime, and it is also funny occasionally. Though it is well written I think it could have been more rigorous told.
It has been on the New York Times bestseller list
.
Books Hobby
Reaktioner: