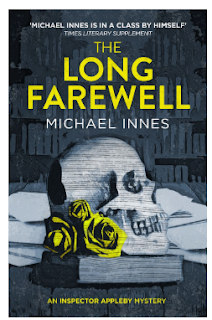 From Crime Classics I was lucky to be sent a free copy of Michal Innes book The Long Farewell. It is number 17 in the Sir John Appleby series.
The story starts in Italy, where Appleby and his wife are on vacation . He visits one of his acquaintances - Lewis Packford - who for a period of time lives at the Garda. He is a literary detective and very interested in Shakespeare and on the verge of new discoveries. They have long  discussions on litterature and Appleby tries to find out what it is Lewis is on to, but with no succes. After dinner they part, and it is the last time Appleby sees him alive.
Later back in England he attends Lewis' funeral and speaks with his lawyer Mr Rood. Rood is not satisfied with the verdict of suicide, and asks Appleby to look into the matter. This takes Appleby to Lewis' home - Urchins.
Here he finds a mixed bag of scholars, collectors two wives and a brother all with a possible motive for murder.
As always in the company of Appleby you are very well entertained.